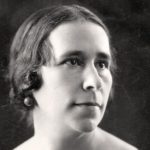 Writer, translator, lecturer and journalist, she was also Inspector of Labour and became Ambassador. She collaborated with “El Sol” and “Blanco y Negro” and was correspondent of The Daily Herald, The Standard and Illustrated London, among other newspapers. She was the daughter of a Scottish lady and a well-off industrialist from Malaga and thanks to her knowledge of several foreign languages she was able to establish an important web of international relations.

She founded the Madrid Lyceum Club and was a candidate to the Spanish Parliament with the Labour Party, 1931. During the Second Spanish Republic she was an active member of the Spanish delegation in the League of Nations, 1932-1933, 1936, the first woman to sign an agreement and who officially represented a country. Member of the Advisory Committee of Experts on Slavery, 1933, she also took part in assemblies of the International Labour Organization, where her interest in working women and children as well as against child slavery was outstanding.

Feminist, suffragist and pacifist, she was the first president of the “Liga Femenina Española por la Paz”, organization linked to WILPF. She was Spain’s Ambassador to Stockholm where she met and befriended Alexandra Kollontai. Later she would write a biography of Kollontai.

She met Crystal Macmillan, Kathleen Courney, Aletta Jacobs and Rosa Manus and when Jane Addams died she attended the funeral in Chicago. After the Spanish Civil War she exiled herself in Mexico.

On Isabel Oyarzábal or Isabel de Palencia, references in English

She was writer and journalist, Inspector of Labour, 1936. Substitute-delegate to the Assembly, 1932-1933; 1936.Member of the Advisory Committee of Experts on Slavery, 1933.President of the LigaFemenina Española por la Paz, [which was part of the Spanish section of WILPF]. Republican’s Spain’s ambassador to Stockholm where she met and become close friend with Alexandra Kollontai. She went into exile in Mexico with the defeat of the Republic in Spain, in 1939.

“Years later Marie Ginsberg, former assistant librarian of the League, assessed the impact of women in policy formation at the League. She claimed that “[t]he only women who really participated in making policy at the League” were Isabel de Palencia of Spain and Alexandra Kollontai: They were able to play an important role because they had already proved their political competence at home and their positions with their own governments were such that their opinions were taken seriously. 45

During her years as Assembly delegate Kollantai was Soviet Minister to Sweden where she became close friends with de Palencia, appointed Spanish Ambassador to Sweden in 1936. 46

In contrast, according to Ginsberg, many women were sent to the League “to please (or silence) some woman’s organizations beseeching its government to appoint a woman”: few were politically qualified and therefore, had little if anything to do with policy-making. Her general assessment of the League women was that they failed to influence policy “not because they were women but because theywere not the right women”.