In the 19th century till 1918, Poland did not exist as a state. Its territory was divided between Austria, Russia and Prussia.

Because there was no Polish state or Polish citizenship, vote rights were not the goal of the  Polish feminists in the XIX century. The nineteenth-century Polish women’s movement demanded access to university education and to professional, payed work. Its achievement was  the Flying University, which operated in Warsaw in conspiracy. The most famous student of the Flying University was Maria Skłodowska-Curie, who was later studying and researching in Paris and won twice the Nobel Prize.

The first activities of the Polish suffragetts began at the end of the nineteenth century. Its high point was the congress, which in conspiracy took place in Warsaw in 1917. About 300 women from all three parts of Poland took part in it. They elected a delegation of five women who went with their petition to the emerging Polish government. That delegation negotiated with Marshal Piłsudski the election law “without sex difference”,  which came in force in 1918.

In the first election women accounted only 1-5% of the places in parliament.  They were significantly better educated than the average in Sejm. They were also able to cooperate with each other over the party divisions. 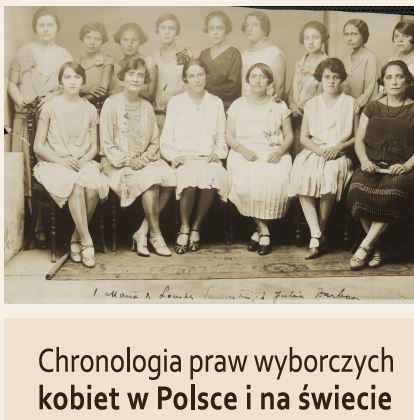