The year 2018 saw huge celebrations marking the centenary of the Representation of the People Act 1918. ‘Vote 100’ exhibitions, events and parties took place all over the UK, and also in the Republic of Ireland (part of the UK back in 1918) which had its own ‘Votail 100’ programme of events. Statues were raised to major suffrage leaders, including Millicent Fawcett in London and Emmeline Pankhurst in Manchester.

The significance of the 1918 Act was that women could no longer be barred from voting on grounds of sex alone. In 1832 the Great Reform Act had defined a voter as a ‘male person’. Decades of campaigning followed. The first mass suffrage petition, signed by 1500 women, was presented to Parliament in 1866. Many women’s suffrage organisations were formed from 1867 onwards, using peaceful tactics of petitioning, marching and lobbying. They banded together as the National Union of Women’s Suffrage Societies (NUWSS) in 1897, under the leadership of Millicent Fawcett, and were known as ‘suffragists’.

In 1903, Emmeline Pankhurst and others formed the Women’s Social and Political Union (WSPU) with the motto ‘Deeds not Words’. The struggle took a militant turn, with some women now adopting tactics such as chaining themselves to railings and breaking windows. Imprisoned ‘suffragettes’, as they were nicknamed, went on hunger strike and many were forcibly fed – a form of torture.

At the outbreak of the First World War, all suffragettes were released from prison and militant activity largely ceased, although suffrage campaigning continued throughout the war. Some women, including Emmeline Pankhurst and her daughter Christabel, supported the war and worked to mobilise women for war work. Others, including Sylvia Pankhurst, opposed the war as pacifists and worked to relieve the poverty of working-class women. Fawcett supported the war but the NUWSS leadership was split, and some peace campaigners including Kathleen Courtney and Catherine Marshall consequently resigned from the NUWSS in 1915. 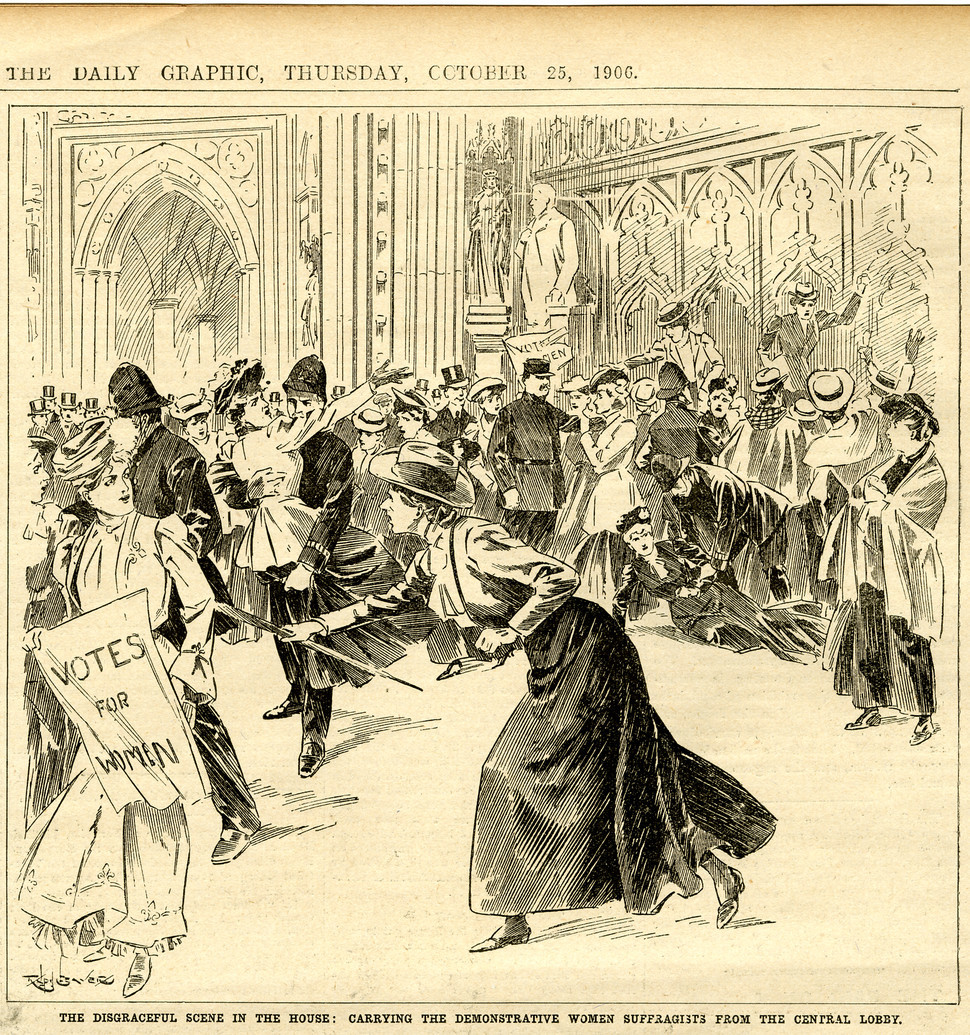 The War made it impossible to deny the vote to men, especially after conscription was introduced – 40% of men could not vote before 1918 because of residential and property qualifications. Thanks to the long and continuous suffrage campaign, and the contribution of many women to the war effort, it became necessary to give the vote to some women too. However, the government did not want to give the vote to women on the same terms as men because female voters would have then outnumbered male voters, in part due to loss of men in the War.So the 1918 Act did not bring equality. It gave the Parliamentary vote to virtually all men, and to 8.4 million women – but not all women. To vote, a woman had to be over the age of 30 and she (or her husband) had to meet the qualification for the local government franchise – effectively, she had to be a householder. Approximately one third of adult women could not vote, including daughters living with parents, domestic servants living in their place of work, and women living as lodgers in furnished rooms, as well as all women under 30 regardless of situation. It is sometimes suggested that the vote was a reward for women’s war work, but in fact much of the war work was done by these excluded women.It took another ten years of campaigning until the Equal Franchise Act 1928. Women finally achieved the Parliamentary vote on the same terms as men – at age 21 and without any property qualification. This means that the true ‘Vote 100’ anniversary is actually yet to come – we have another chance to celebrate and commemorate in 2028.

A rhetoric of love and shared humanity was consciously chosen by some pacifist groups active during and after the First World War. This was used to counteract the discourse of hate that dominated belligerent (and even some neutral) nations at this time, and it was absolutely central to the vision of a feminist peace developed by women’s groups working to oppose the war. Their vision rested on a discourse of shared female victimhood, with the emphasis on women as both victims and potential agents of radical change.

Using the insights gained by scholarship in the History of Emotions, this article will explore the gendered ways in which women in the organized women’s movement used, evoked and described emotions of friendship, love and sisterhood to create, consolidate and reflect emotional communities during and in the aftermath of WW1. Many contemporaneous commentators dismissed women’s anti-war activism as sentimental and naive, but this article will argue that they deployed articulations of love as both a moral imperative and a powerful, gendered strategy of resistance that was central to their claim to greater political influence at home and abroad.

FEMINIST PEACE ACTIVISM 1915 and 2010: ARE WE NEARLY THERE YET?
by Ingrid Sharp

In 1915, over one thousand women from warring and neutral nations met at The Hague to protest against the First World War. In 1919, some of them met again in Zurich to discuss ways of building a sustainable peace. Focusing on the concepts of human security and positive peace, this article compares these activists’ vision of a gendered peace with the principles underlying UN Security Council Resolution 1325 (2000) and considers whether the barriers and obstacles to women’s participation in formal peace negotiations have been overcome. It also considers whether the Hague women’s work for peace was informed by a discourse of human rights. The comparison works to improve our historical understanding as well as revealing how attitudes to war, peace, and gender have developed over the intervening period.