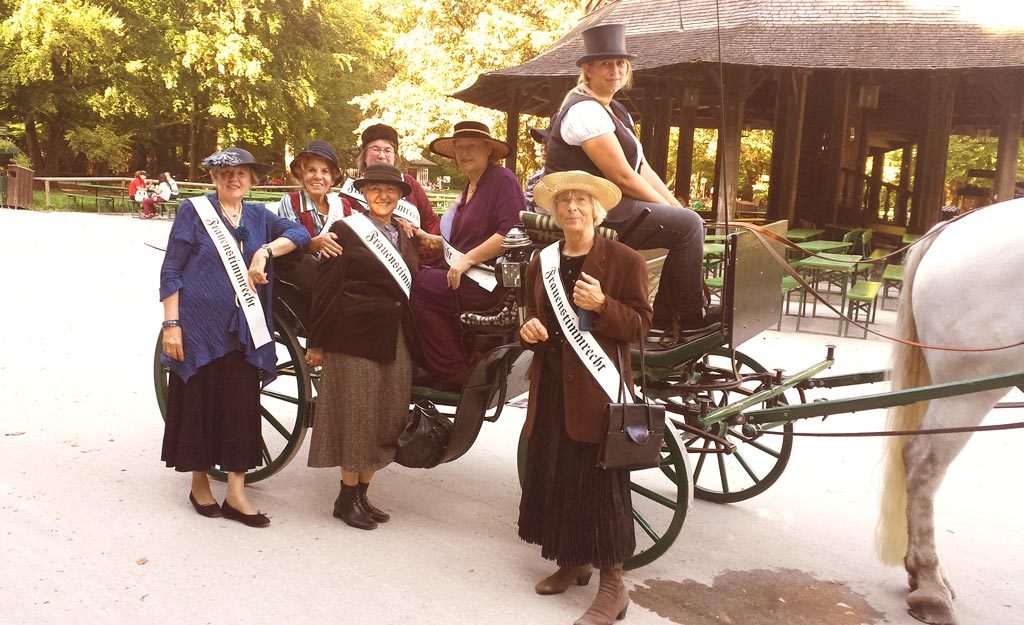 Demonstration in 2018 in the English Garden in Munich
remembering the historic women’s corso in Munich, 1912

8.11.2019 100 years after the proclamation of voting rights for women in Bavaria

November 1918, women in Germany got active and passive voting rights.

Many women from socialist movements – such as Clara Zetkin – and of the radical bourgeois feminists – with Anita Augspurg, Lida Gustava Heymann – had fought since generations nationally and internationally connected (e.g. IWSA) to reach this goal. They wrote numerous articles, fought for the right of girls and women, against discrimination, sexual violence and for peace and justice.

In Germany, women were officially not allowed to get organised in “political groups” and to discuss politics in public before 1908 (preussisches Vereinsgesetz).

The resistance from the opponents to the feminist movement was enormous. Academics, teachers, artists, military personals, managers build the “Association against Emancipation” arguing that the feminists would destroy the family and  weaken the nation. For a long-term period they kept the idea of inferiority of women.

The activists had to fight for every single right.

In the first national election in January 1919, 90 % of the female electorate voted and voted for  10 % female deputies, a percentage which was only reached again in the German Bundestag in 1983 – 37 women! ….to be continued

In the Bavarian revolution, Kurt Eisner introduced women’s voting rights  Nov 8 1918 as one of the first political acts as new president of the region. Germany followed 2 days later.

Anita Augspurg, Lida Gustava Heymann, Constanze Hallgarten, Gertrud Baer and many others started to work what they had planed since years: fight for equality, new anti-discriminatory family laws, the right to abortion, equal pay. Anita A. participated in the new Zetralarbeiterrat as 1 of 8 women out of 180 men. A specific women’s council was refused.

Until now, women still have not reached parity in the parliaments according to their percentage in the population. The actual German Parliament consists only of 31%.