The General Strike and women’s suffrage 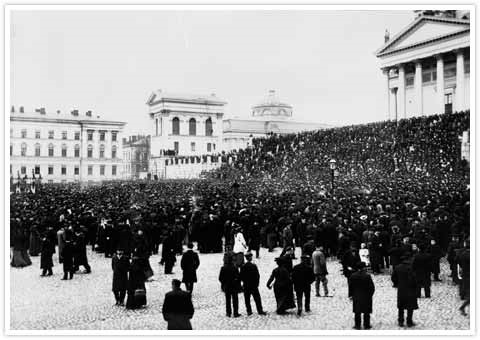 The most apparent and far-reaching implication of the General Strike of 1905 was undoubtedly the adoption of the principle of universal and equal suffrage in Finland. Compared internationally, the most important outcomes were the confirmation, in 1906, of a unicameral parliamentary system and the achievement of women’s right to vote and stand for election. Although the number of people entitled to vote expanded radically among the middle and lower classes, the primary beneficiaries of the voting reform were women, who were freed from restrictions relating not only to their gender but also to class and wealth, and particularly married women, whose husbands were no longer to act as their wives’ guardians.

The political rights gained by women as a result of the General Strike were a remarkable achievement also from an international perspective. Finland was the first European country to grant women both the right to vote and the right to stand for election. In the Pacific region, New Zealand and Australia were ahead of Finland in the advancement of gender democracy. New Zealand granted women the right to vote in 1893 and Australia allowed women to both vote and stand for election in 1902. However, Finnish women were the first to exercise both of these rights.

In most countries, women’s suffrage was achieved at dramatic historical turning points or immediately before or after them. In the countries in the Pacific region, the voting reform was triggered by the construction of an administrative system separate from that of the British mother country and by the related nationalist movements in which the campaign for women’s suffrage was an important element. In Norway, the issue of women’s suffrage was debated actively after the country became independent from Sweden. Similarly, as a direct or indirect consequence of the First World War, several European countries granted women the right to vote. Developments in Finland followed the same pattern: a strong nationalist emphasis combined with political instability in conjunction with the General Strike resulted in a radical reform of suffrage legislation in Finland.

However, the adoption of the principle of universal and equal suffrage for both men and women in Finland cannot be attributed purely to skilful employment of the state of emergency created by the General Strike. More accurately, the chaotic General Strike and the collective sense of threat created by rumours and fears led to a radical culmination of a situation which was by then long overdue to be resolved. An interesting example of the events leading up to the reform was the approval at a strike meeting in Vyborg on 30 October 1905 of a resolution in which women’s suffrage was included in the demand for universal and equal suffrage. The same demand was repeated in a declaration issued on 1 November 1905 in Tampere and was approved at popular meetings held during the General Strike. The fact that the demand for women’s suffrage was expressed as a matter of course right at the start of the strike indicates that it was not a spontaneous idea but rather part of a previously formulated programme which was implemented as soon as the opportunity arose. The matter-of-course nature of the demand for women’s suffrage surely also explains the fact that the gender aspect of political citizenship was barely discussed during the General Strike.

In examining the achievement of women’s suffrage, more interesting than to analyse the General Strike is to focus on the chain of events that preceded the historical moments that culminated in the breakthrough for gender democracy. Irrespective of the interpretative model used, the establishment of the Finnish Women’s Association in 1884 has been seen as a key milestone in the progress of the women’s movement and the closely related suffrage movement. The central objective of this association was the improvement of women’s educational circumstances, in addition to which the association demanded equal pay for equal work, equal judicial status for men and women, and the application of the same criteria to both men and women who wanted to stand for election to posts of the State, the municipalities and the Church. In practice, the Finnish Women’s Association was aiming to extend the right to vote to independent women who met certain wealth requirements, i.e., to affluent bourgeois and/or educated women. The same stand was also taken by another Finnish women’s rights association, the Union Women’s Rights Federation in Finland, which had split off from the Finnish Women’s Association in 1892 because of differences of opinion on politics and practices. Although the demand for suffrage was included in the programmes of women’s rights associations on their establishment, the issue did not appear on the political agenda until the end of the 19th century.

The first step towards the endorsement of women’s suffrage was taken when representatives Herckman, Killinen and Kyander submitted a petition in 1897 to the Estate of the Burghers. The representatives wrote in their petition that “all women in our country who meet the conditions set by our Constitution concerning the right to stand for election should be granted the same right to vote as men”. This petition was originally the brainchild of the Kuopio Women’s Association and clearly reflected the views of the well-known women’s rights advocate Minna Canth: in the grounds for the petition, the sanctity and permanence of legislation that oppressed women were disputed in a manner characteristic of Canth, and the duties and usefulness of women in Finnish society were emphasised. Although the petition did not achieve any practical results, it had some significance as the first gender-specific demand for the right to vote and it compelled the Diet to take a clear stand on the issue of women’s suffrage for the first time.