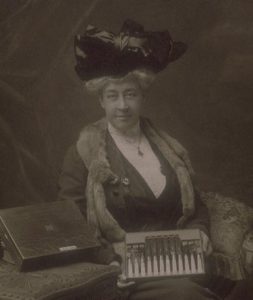 Though much less well known than other female political activists of the early twentieth century, Gertrude Eaton made significant contributions not only to the campaign for women’s vote, but also to the issue of penal reform. It was thanks to her lobbying efforts that penal reform was put on the agenda of the League of Nations, providing the groundwork for the United Nations’ standard minimum rules for the treatment of prisoners, adopted in 1955.

Born in Swansea in 1864, Gertrude was one of the eight children of Robert Eaton, a businessman and magistrate, and of his wife Helen, the daughter of a solicitor. Little is known about Gertrude’s early life, but it seems that she enjoyed a comfortable childhood, marred only by the death of her father in 1872. It is probable that she received her education at home, under the tutelage of a governess, and she may have spent some time in Continental Europe, perhaps studying music in Italy or Germany.

In 1894 at the age of thirty Gertrude entered the Royal College of Music (RCM) in London as a mature student. She studied singing and piano, performing at concerts in London and around Bath. In 1901 she was living at 2, Bedford Terrace in Kensington. She later moved to nearby Gloucester Walk, where she remained for many years.

In 1911 she co-founded The Society of Women Musicians (SWM) together with the violinist and composer Marion Scott, and the pianist and composer Katherine Eggar. By this time Gertrude was already an active suffragist. As an unmarried woman possessed of independent means, she was able to devote considerable time and energy to the cause. She was a member of the National Union of Women’s Suffrage Societies (NUWSS) and of the Conservative and Unionist Women’s Franchise Association (CUWFA), both of which aimed to achieve women’s suffrage through peaceful and legal means.  In 1910 she was reported to be giving lessons in public speaking to local suffragists at her home. Later that year she took part in a ‘country crusade’ organised by the CUWFA, chairing meetings and presiding over a literature stall at Aylesbury.

Her activities took a more militant turn from 1911, when she boycotted the census in open defiance of the law. She also joined a new, innovative pro-suffrage group founded in October 1909 by leading members of the Women’s Freedom League (WFL): the Women’s Tax Resistance League (WTRL). Members of the WTRL boycotted the payment of a wide range of taxes and licences, drawing on a tradition of tax resistance which included John Hampden, the seventeenth-century politician who refused to pay Ship Money to King Charles I, and the eighteenth-century American colonists who used the slogan ‘No taxation without representation’ to show their opposition to British taxes.

Tax resistance was difficult to prosecute, but in several cases the government succeeded in seizing and selling at auction items owned by the resisters. In August 1911 Gertrude’s silver was confiscated and sold at the Messrs Whitely salerooms.

In keeping with its established tactics, the WTRL turned the occasion into an opportunity for demonstration and publicity. Gertrude said a few words of protest in the auction room, and Mrs Cobden-Sanderson (a founding member of the WFL) explained to the bidders the reason for her refusal to pay tax. For publicity purposes, Gertrude was photographed with a full set of her silver cutlery. By the autumn of 1911 she was on the committee of the WTRL. As well as assisting in the organization of fund-raising events, she made speeches at sales of other women’s distrained goods, and she purchased items offered for bidding, so that they could be returned to their owners. When war broke out, the League ceased active campaigning. Its offices were given up, and Gertrude continued the work from her living room in Kensington. In March 1916 she was appointed honorary secretary to the League. As such she joined the Consultative Committee of Constitutional Women’s Suffrage Societies, which petitioned the government for the inclusion of women’s suffrage in the Representation of the People Bill.

Gertrude was not amongst the 180 British women who signed up for the 1915 Women’s International Congress, but in 1919 she attended the second congress in Zurich as a member of the British delegation. She travelled to Vienna in 1921 for the third WILPF congress, at which she recommended the adoption by the league of the ‘Pax’ pin as its official badge: ‘because we should then recognize one another in any country as members of the Women’s International League; because it would give openings for discussing peace; and because the making of the badges would give employment in Austria.’

Gertrude’s greatest achievements were however as a campaigner for penal reform. Her interest in the subject was very probably inspired by her suffrage activism. In 1907 a Penal Reform League (PRL) was founded in England as a direct result of the first prison sentences served by suffragists – most notably Anne Cobden-Sanderson who, following her release from Holloway prison,  pledged that women would end the ‘stupid system’ of prison administration as soon as they had the vote. The revelation by suffragettes of the disgusting conditions in women’s prisons motivated Gertrude to campaign for improvements: as Margery Fry, who came to know her well from 1918 onwards, recalled in an obituary of Gertrude, ‘cruelty and injustice…never ceased to rouse [her] to hot indignation’. It is not clear when Gertrude joined the PRL, but by 1910-11 she was a member of its Executive Committee.

The PLR remained close to the suffragist movement until 1918, but it did not confine itself to questions arising from the suffrage agitation. Its members promoted the use of probation, supported ‘penal-welfare policies’ such as the Borstal system and championed the juvenile courts to handle the cases of young offenders. In 1918 Margery Fry took command of the League and soon after she arranged its merger with the Howard Association, the oldest penal reform charity in the UK. Gertrude was one of several PRL executive members who served in the new organization, named the Howard League for Penal Reform (HLPR). She worked tirelessly on behalf of prisoners, visiting prisons at home and abroad, chairing sub-committees and representing the HLPR in talks to community groups, churches and other organizations.

In 1926, spurred by reports of ill-treatment of prisoners in Eastern Europe, the HLPR joined forces with the Society of Friends to launch a ‘prisoners’ charter’ – a statement of minimum standards for the treatment of prisoners ‘in all civilized societies’. The League soon obtained the backing of the League of Nations Union (LNU), and Gertrude represented the latter at a meeting of the International Federation of League of Nations Societies (FLNS), which also resolved to support the Charter. In 1927 she travelled to Geneva to attend the League of Nations’ 8th assembly, and present the FLNS resolution in person. Thereafter she visited Switzerland every summer, lobbying the League’s General Assembly, until in 1937 ill-health prevented her from carrying on with the work. The annual lobby was then taken over by Margery Fry. As a British government representative to the International Penal and Penitentiary Commission (IPPC), Fry attended its final post-war conference in 1950, and she was influential in the construction of the charter for prisoners eventually adopted by the United Nations in 1955.  Sadly, Gertrude did not live to see this great victory. She died on 8th March 1939, in Hampstead.