Lidia was born Lidia Drahomanova, on 17 October 1866 in Kiev, Ukraine. Her father was a famous philosopher, historian, and folklorist Professor Mykhailo Drahomanov, and her mother a famous actress, Ludmila Drahomanova.

Lidia received a degree from the Faculty of Philology of the University of Geneva. On 28 December 1888, she married Ivan Shishmanov – was a Bulgarian writer, ethnographer, politician and diplomat. He served as Ambassador of Bulgaria to the Ukrainian State and the Ukrainian People’s Republic. That is where they met each other. The couple moved to Bulgaria in 1889, where Shishmanova established herself as an active public figure in the areas of women’s rights, the development of Bulgarian art and culture and presenting the cause of Bulgaria in Europe after the Balkan Wars.

Their home in Sofia became the main meeting place for Bulgarian intellectuals and those engaged in strengthening Ukrainian-Bulgarian relations. In 1896, Shishmanova published a book in France as part of series entitled „A collection of folk songs and tales“. She wrote for other Bulgarian publications such as „The Bulgarian Review“, „Freedom of opinion“, „The Bulgarian collection“, „Peace“, „The Journal of Women, and Women’s Voice“. She wrote in Ukrainian for „Ukraine“, „Rada“, „Dilo“ and „New Ukraine“. These pieces were reviews of theatre and music scene in Bulgaria and abroad.

Lidia wrote for the French newspaper „La Bulgarie“ for many years, promoting Bulgarian culture, literature and arts. She wrote numerous articles on the politics in Bulgaria, Ukraine, the Balkans and Western Europe, as well on the scientific achievements of the time, and on women’s rights in Bulgaria.

In May 1919 she took part in the Zürich Congress where she suported the Bulgarian women who did a lot fort he society while men were away at war. 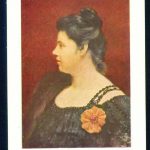 Much of the advancement of women’s rights in Bulgaria has been attributed to Shishmanova. In response to the then Higher School in Sofia (now Sofia University) not accepting women, she wrote the article The Woman and the university, which advocated for the rights of women to be educated for their own good. In 1922, she campaigned against the unpopular Labour Service Act which required girls aged 16 to perform community service for a period of six months. Some of the education reforms put forward in her articles were then picked up by Ivan Shishmanov during his tenure as Minister of Education in the Office of General Racho Petrov.

Shishmanova died in Sofia on 6 January 1937.