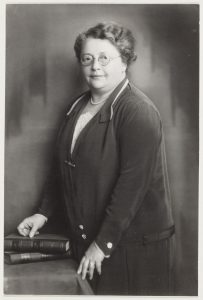 She was murdered by the Nazis in Bernburg

“The women must stand strongly together and tell the statesmen that we do not care to which party and country they belong, but no human lives must be offered again”.

More than nine million women from all over the world demanded disarmament in a petition to the League of Nations Disarmament Conference in 1932. Rosa Manus was the driving force behind this petition assembled by women’s organisations and she organised the handover to the president of the conference. This  conference failed miserably due to the antipoles of World War I and the rise of Hitler in Germany.

The present permanent UN Conference on Disarmament has been determined and paralysed by differences between superpowers and other countries about the necessity of military means and balance of power. Nevertheless the Conference has succesfully negotiated agreements against the proliferation and development of weapons of mass destruction. Women’s peace organisations follow Rosa Manus demanding disarmament and calling for peaceful solutions of conflicts and the ban of weapons that destroy human lives and societies.  ( Ite van Djik)