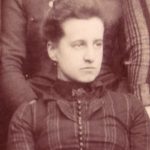 Frances was born in Writtle, Essex to a long line of wealthy upper class academics. Her great grandfather was notable astronomer Sir William Herschel and her aunt Constance Herschel lectured in natural science and mathematics, being one of the early women lecturers at Girton College, Cambridge. She followed suit by studying mathematics and attending Girton herself. Frances went on to be one of the founding members of the American Mathematical Society in 1894 whilst studying in the US at Bryn Mawr college to earn a degree as most universities in the UK wouldn’t accept women for exams.

Due to this, more is known about Frances’ mathematical achievements than her work on suffrage and pacifism. Through research it is clear that Frances interest in suffrage and womens rights reach back to her days at Girton where she spoke to the oratorial society on women’s suffrage talking about the aims and history of and its relation to the Women’s Suffrage Movement and the Higher Education of Women and was a member of the CWSA (Cambridge Association for Women’s Suffrage). Later, Frances became Honorary Secretary of the National Union of Women’s Suffrage Societies (NUWSS) under Millicent Fawcett and can be seen to sign a letter written in 1908 to The Times, stating her disagreement with militant methods taken by suffragettes. Her role highlights many of the tensions within the movement head on and another example can be found in archive material showing her dealing with difficult correspondence with Scottish suffragists wishing to split and create their own division. Frances became very active in the Suffrage movement in the North East of England because of her lifetime companion Dr. Ethel Williams, who was a medical professional in the area and president of the NUWSS branch

Whether this relationship was romantic or not we do not know. All we know is the long-term and obviously close relationship these two intelligent women had; both li 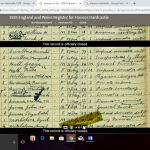 ved unconventional lives for the time, being similarly politically aligned and active, not getting married and having children, and choosing to lead financially independent lives.

Frances and Ethel travelled together to Zurich in 1919 and can be seen photographed sitting together in the famous photograph of the British delegates.

Ethel and Frances in their later lives built a house in Stocksfield, outside of Newcastle, where census records showed they lived with two domestic servants and a personal secretary in a grand beautiful house with large gardens.