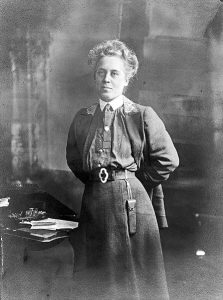 Ethel Williams was a doctor and the first woman to found a general medical practice in Newcastle upon Tyne.  A suffragist, pacifist, educationalist and social welfare campaigner, she was a founding member of the Women’s International League for Peace and Freedom (WILPF).

Ethel was born at Cromer, Norfolk, in 1863. Her father was a country squire and a friend of Lewis Carroll. Her mother came from a family that had included William Harvey, the seventeenth-century physician famous for describing the circulation of the blood. Ethel was educated at Norwich High School for Girls and Newnham College, Cambridge, 1882-5. She did not take a degree, as in those days the University did not permit women to graduate. She subsequently attended the London School of Medicine for Women, graduating MB in 1891 and MD in 1895. In 1899 she took the Cambridge Diploma in Public Health and began her medical career as resident medical officer at the Clapham Maternity Hospital and at the Blackfriars Dispensary for Women and Children. She subsequently moved to Newcastle upon Tyne as the city’s first woman doctor. In 1906 she set up a general medical practice in Ellison Place with her colleague and friend Ethel Bentham, a member of the Independent Labour Party (ILP) and an early believer in what would now be called socialised medicine.

Like most women doctors of her generation, Ethel concerned herself primarily with the health needs of women and children. In an effort to reduce Newcastle’s appalling rate of infant mortality, she provided milk for infants at her own expense. On behalf of the Fabian Society she conducted an inquiry into the condition of poor law children, published in 1910 as an Appendix to the Report of the Royal Commission on the Poor Laws and Relief of Distress. In 1917 she co-founded the Northern Women’s Hospital, which is now the Nuffield Health Clinic on Osborne Road, and helped to initiate residential care for boys with learning disabilities. She was one of the initial members of the Medical Women’s Federation, founded in 1917 to further the interests of women doctors and women patients. During the war she joined the Workers’ Educational Association as a tutor, setting up health courses for women all over the North East.

Ethel played a considerable part in the struggle to win votes for women. In 1900 she was one of the founding members and first President of the Newcastle Women’s Suffrage Society (NWSS), renamed North-Eastern Society for Women’s Suffrage (NESWS) in 1905. In February 1907 she took part in the ‘Mud March’, the first large procession organized in London by the NUWSS, and she was involved in similar processions in Newcastle. Her suffragist marching banner from circa 1906 is one of the treasures of Newcastle University Library’s Special Collections. As the first woman in the North East to drive a car, she came to play a pivotal role in the organization of the suffrage movement in the area. She was a familiar figure at by-elections, and in forcing the City Council to debate women’s suffrage. On 29 April 1911, at the time of the revised second Conciliation Bill that would have given some women the vote, she took part in a joint WSPU/NESWS deputation to the Liberal MP Herbert Samuel.

In 1912 she became a tax resister, withholding her taxes until the fate of the Conciliation Bill was known, and then refusing payment when hopes were dashed. On 18 June 1913, she was one of 100 members who left Newcastle, banners flying, to join the great suffragist Pilgrimage to London. By 1915 she was chair of the North-Eastern Federation of the NUWSS, formed in 1910.

As a member of the Liberal Party and secretary of the Newcastle Women’s Liberal Association, Ethel initially resisted efforts to bring the NESWS closer to the Independent Labour Party. In 1908, tensions over whether the NESWS should support Labour of Liberal candidates at by-elections caused a group of activists to break away from the Society and join the WSPU. The Newcastle branch of the WSPU took full credit for the defeat of the Liberal candidate at the Newcastle by-election later that year. After 1912, however, the failure of the suffragist campaign to achieve its goal under a Liberal government prompted Ethel to switch her political loyalties. On the eve of the First World War, she severed her links with the Liberals, believing them to be ‘neither active nor hearty enough on the subject of the enfranchisement of women’. She declared instead to be ‘in sympathy with the Programme of the Labour Party’, although it is doubtful if she went so far as to join the Labour Party.

Meanwhile, her growing practice at Ellison Place had necessitated a move to larger premises at 3 Osborne Terrace, Jesmond. She shared the house with Frances Hardcastle, her lifelong companion. A brilliant mathematician, Frances devoted much of her time to the women’s suffrage movement, serving first as joint secretary of the National Union and subsequently as honorary secretary of the North-Eastern Federation of the NUWSS.

When war broke out, Ethel organized a committee of women’s organizations to aid refugees and women workers with clothing, health care and employment. Sickened by the horrors of war, she became a pacifist. She joined the Union of Democratic Control, a pressure group which campaigned for greater democratic accountability in the making of British foreign policy. In 1915 she was one of the 180 British women who signed up for the Women’s Peace Congress at The Hague. Ethel never made it to The Hague, because the British Foreign Office refused to grant her a passport, but in October 1915 she took part in the formation of the Women’s International League (WIL), the British section of what was to become WILPF.

Her opposition to the war took a dramatic turn in July 1917 when she acted as secretary of the Newcastle Workers’ and Soldiers’ Council. Modelled on the ‘soviets’ established in Russia after the overthrow of Tsar Nicholas II, the British Workers’ and Soldiers’ Councils supported the idea of a negotiated peace, alongside Russia’s revolutionary government. Special Branch took a keen interest, and many of the meetings were prevented from happening. Ethel arranged a meeting at which Charlotte Despard and members of the local trade unions were due to speak. She booked the Town Hall for the occasion, but the booking was withdrawn at short notice. The meeting was thus hastily rearranged at the Central Hall Temperance Institute. Almost immediately after the meeting had started, a crowd consisting of soldiers in civilian clothing and members of the Anti-German League gathered outside the building and began to attack the entrance doors with stones. The protesters then managed to force their way into the building, singing ‘Rule Britannia’ and hurling abuse at the speakers. Fighting broke out in different parts of the Hall, and eventually the platform was stormed. Ethel and Charlotte Despard were lucky to escape unscathed.

Ethel was one of the British women who attended WILPF’s second congress, held in Zurich in May 1919. In the summer of 1919 she visited Vienna to report on the effects of food shortages for WILPF’s publication Towards a Permanent Peace. Earlier that year WILPF members had read reports that women and children in Central Europe were starving as a result of the food blockade imposed by the victorious Allies. Haunted by harrowing images of starving children and worn-out mothers, they had started to work with other organizations to provide relief and lobby government to raise the blockade. Ethel condemned the allied blockade as it caused malnutrition and rickets amongst children in the city. She urged national governments to ‘remember that such warfare is directed against children, and that on them must fall the brunt of the blows’.

In 1924 Ethel decided to retire from medical practice and move to a house she had built with Frances at Stocksfield, Northumberland. Retirement did not mean inactivity, however. Apart from cultivating a famous garden at Stocksfield, she remained actively involved in the peace movement. She organized the Tyneside League of Nations Union and frequently entertained overseas visitors as well as attending peace conferences. She also played a major part in the Northumberland Townswomen’s Guild and was a magistrate on the juvenile bench. Between 1934 and 1936 she served as President of the Medical Women’s Federation. During the Second World she returned to Newcastle, where she volunteered to help with air raid casualties. She died at Stocksfield on 29 January 1948, just months before the establishment of the National Health Service.