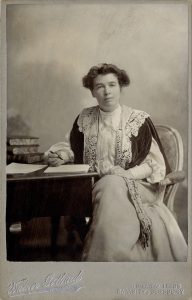 Emmeline Pethick Lawrence (nee Pethick) was born in 1867 into a large, prosperous evangelical  family in Bristol. They later moved to Weston-super-Mare where Emmeline went to school.  Nervous of being trapped at home with no prospects except marriage Emmeline volunteered in 1890 to join the Sisterhood of the West London Mission where she met  one of its founders Mark Guy Pearse and her co-organiser, and lifelong friend, Mary Neal.  Both women were influenced by the socialist views of Kier Hardie and Edward Carpenter.

In 1895 Mary and Emmeline decided to break away on their own to found the Esperance Working Girls’ Club, a dressmaking business called Maison Esperance (with exemplary working conditions) and a holiday hostel for working girls in Littlehampton.  Through a performance of the Esperance Club Emmeline met Fred Lawrence, down from Trinity College Cambridge and also working in the mission field, as well as editing a newspaper, the Echo and later the monthly Labour Record and Review (Fred was even better off than Emmeline but just as high-minded).  They married in 1901 and thus began a devoted lifetime feminist partnership, symbolised by the fact that they unusually put their names together to make Pethick-Lawrence.

By 1906 Fred and Emmeline were living in a flat in Clements Inn, off the Strand. with a country house ‘The Mascot’ near Dorking, partly intended as a holiday home for poor London children.  In that year (the year of Labour’s electoral success) Kier Hardie introduced Emmeline to Emmeline Pankhurst as ‘a practical and useful colleague who could develop in London the new society she had founded in Manchester – the Women’s Social and Political Union (WSPU) – to fight very militantly for the vote.  Emmeline was soon drawn into the ideology and the establishment and growth of the WSPU (the suffragettes, as they came to be called) in London and became its treasurer and, in effect, its business manager, attempting to give a solid basis to Mrs Pankhurst’s guerrilla method of political activity.  She developed a strong relationship with Emmeline Pankhurst, with the younger Annie Kenney, and with Mrs Pankhurst’s daughter Christabel, who for five years shared Fred and Emmeline’s flat in Clement’s Inn.  (This flat, and an expanding set of rooms adjoining it, also became the headquarters of the WSPU).  Emmeline became virtually Mrs Pankhurst’s ‘right hand woman’, participating in public demonstrations, going on delegations, writing leaflets and other rationales of the suffragette cause and speaking at suffragette events large and small, including in Trafalgar Square and in 1909 at the Royal Albert Hall. She had a flair both for fund-raising and publicity and in 1908 chose the iconic colours purple white and green to be the suffragette colours

Fred followed Emmeline into the WSPU, sharing the role of treasurer and using his money in effect to bank roll the organisation, including standing bail for individual suffragettes who had been arrested.  In 1907 Fred and Emmeline co-founded and co-edited Votes for Women.  They were both imprisoned for taking part in various WSPU demonstrations and in 1912 Emmeline was subjected to force-feeding in prison.  It was at this point, when both could hardly have been more deeply embedded in the work of the WSPU that the split came.

The causes of the split, engineered by Mrs Pankhurst, are still contested. Received wisdom is that Fred and Emmeline objected to the increasing violent tactics of the WSPU including property damage and arson, and Mrs Pankhurst could not brook opposition. But there was also an issue that Fred’s wealth, having been a massive asset to the WSPU, was now becoming a liability since in the face of hostile government action Fred would become a weapon with which to damage the movement as ruining him would weaken it.  Whatever the reason, Fred and Emmeline found themselves ejected from the WSPU and WSPU headquarters were moved from Clements Inn to Lincoln’s Inn. 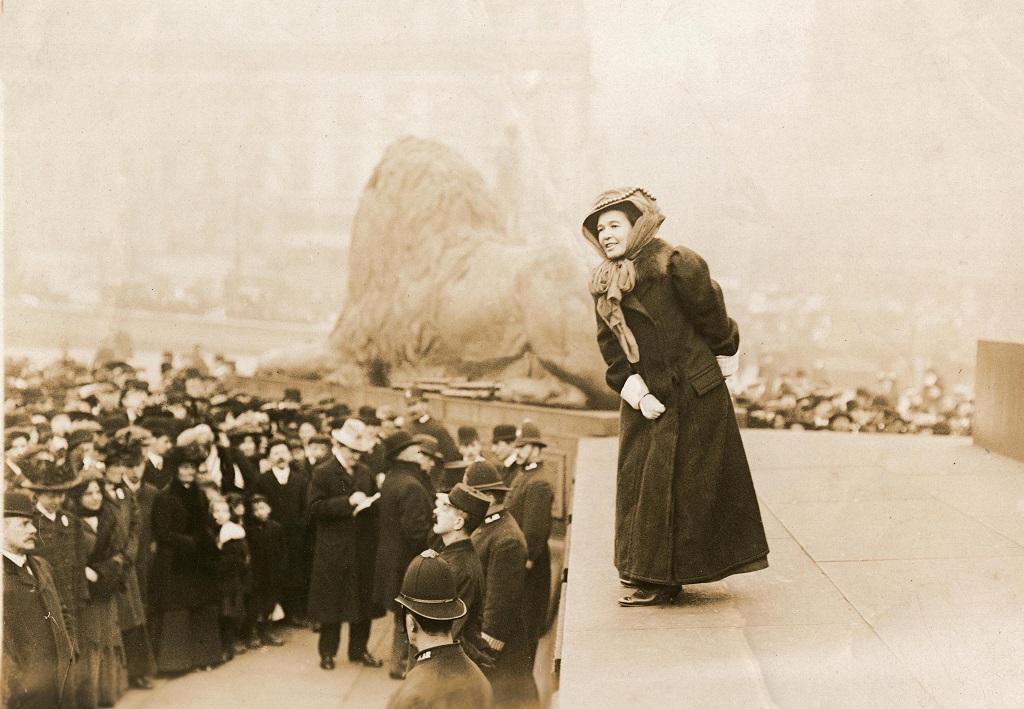 Fred and Emmeline were understandably both shocked and deeply upset by this rejection but they resolved from the start that they would not damage the reputation of the WSPU by making this public – and they maintained their support for the movement for the rest of their lives.  They continued to publish Votes for Women till 1914 and were associated with first the Votes for Women Fellowship and then the United Suffragists.

With the outbreak of war in 1914 Emmeline became increasingly involved with the search for peace.  She was one of only three women from Britain to make their way to the Women’ Peace Congress in the Hague in 1915 and subsequently became honorary treasurer of the Women’s International League of Great Britain which came out of the Congress. The women in the Hague resolved to meet together after the war to help formulate the terms of peace and the second International Congress took place from May 12-17 in Zurich, while the official Peace Conference took place in Paris.  Participation in Zurich alongside women from all countries including Germany was, for Emmeline, ‘perhaps the most moving experience of my life’.  The Congress concluded that only by ‘.reconciliation could peace be made secure in the world’ while in Paris the Treaty of Versailles was overtly punitive towards Germany thus opening the way to another war.  In Zurich the fully fledged Women’s International League of Peace and Freedom was constituted and decided to move its headquarters from the Hague to Geneva.  Emmeline travelled extensively round Europe speaking about reconciliation.

But Emmeline had not forgotten her passion for the suffrage.  She must have voted in the 1918 election which for the first time gave the vote to some women (following the Representation of the People Act) but she did better than that – she actually stood for Parliament (the first time women could stand as well as vote)  as a Labour candidate for the Rushholme division of Manchester.  Her platform of the need for a just settlement for Germany was not a vote catcher in a post War nation and she was roundly defeated although she was placed above the Liberals.  The irony of this was not lost on Emmeline:

It was a strange experience for one who had given eight years of life as I had, in the endeavour to win votes for women, to watch working class mothers, with their babies and small children, eagerly going to the poll to record their votes against me.

Emmeline never stood for Parliament again although Fred eventually won a seat for Labour and rose through the ranks of the Treasury to become Secretary of State for India and to join the House of Lords.  Emmeline travelled extensively with Fred, particularly to India. She did not have such a distinguished career but she devoted the rest of her political life to campaigning for peace .  In addition from 1926 she was President of the Women’s Freedom League, a member of the executive committee of the Open Door Council and a Vice President of the Six Point Group.  She died in 1954.

Harrison, Brian, ‘The Politics of a Marriage’ in Prudent Revolutionaries – Portraits of British Feminists Between the Wars, Clarendon Press, 1987

Pethick-Lawrence, Emmeline, My Part in a Changing World, Victor Gollancz, 1938

Pethick-Lawrence, Fate has been kind, Hutchinson and Co, 1942