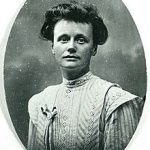 Annot Wilkie was born in Montrose on 8 June 1874 into a well-educated but poor family. She went to the University of Dundee but was unable to get her degree because she was a woman. She then trained as a teacher.  By the early 1900s she was an active member of the Dundee Independent Labour Party where she knew other socialist women like Agnes Husband. She became Secretary of the Dundee branch of the WSPU. In 1907 she moved to Manchester to marry another ILP member Sam Robinson and worked briefly as a WSPU organiser. In February 1908 she took part, with other WSPU members, in an attempt to force their way into the House of Commons hidden in a furniture van. She served 6 weeks in prison.

In 1910 Annot became a part-time organiser for the Women’s Labour League (WLL) and that year put forward a conference resolution condemning the Labour Party leadership for its lack of support for the women’s franchise. By this time she was an active member of the local ILP and had 2 daughters, the youngest Helen being blessed by Keir Hardie at her christening.  By 1911 her marriage was breaking down and she was dismayed by the Pankhurst’s autocratic leadership of the WSPU.

In 1912, she moved to the National Union of Women’s Suffrage Societies (NUWSS) as a full-time organiser in the Election Fighting Fund which was an informal arrangement with local Labour activists to promote pro-suffrage candidates at elections. She was active in the EFF across the NW textile towns and worked for a time in Blackburn with Ellen Wilkinson as her assistant.

When war came in August 1914,  Annot spoke out against the war on a number of public platforms and  was a signatory, alongside Margaret Ashton and a number of other Manchester women, to the “Christmas Letter “ an open letter of sisterhood and solidarity to German women from British  women which was published in the radical press in the first winter of the war. She was initially active on relief committees in Manchester in 1914, highlighting the need for better war allowances and better housing although her war work became increasingly critical of the war

She also served on the Manchester Women’s War Interest Committee, lobbying the government for better conditions and pay for women drafted into the munitions industries.   As a pacifist, she resigned with many others from the national and local NUWSS in early 1915 and was active in the development of the local branches of Women’s International League for Peace & Freedom (WILPF). In 1917 she was active in the Women’s Peace Crusade across the country talking on platforms with Helen Crawfurd, Ethel Snowden, Margaret Ashton and Lillian Anderson Fenn.

After the war she was employed as an organiser by the WILPF and travelled in Britain, USA and Holland on its behalf. In 1919 she was part of the British delegation to Zurich where women from across Europe tried to influence to make the Treaty of Versailles more humane.

In October 1920 she visited Ireland as part of a 10 woman delegation from the Manchester branch of WILPF to investigate burnings and murder by British forces. They held a meeting in the Free Trade Hall on their return on 18th October. In December she and Ellen Wilkinson who had also been on the delegation which travelled to the United States to give evidence to an American Commission.

But by 1922 there was no longer any money to employ her full-time and Annot had to return to teaching in Scotland. She died suddenly during an operation for the removal of her gall bladder in Perth Royal Infirmary on 29th September 1925

Her friend Ellen Wilkinson, described her in the Labour Leader as “a big woman and a big personality” and with “an exquisite sense of the ridiculous and a sharp tongue.” There was a memorial service in Manchester and her fellow WILPF, pacifist and suffragist friend Margaret Ashton kept contact with Annot’s two daughters for many years.