During her years at Hull House, Hamilton was active in the women’s rights and peace movements. She traveled with Jane Addams and Emily Greene Balch to the 1915 International Congress of Women in The Hague,[42] where they met Aletta Jacobs, a Dutch pacifist, feminist, and suffragist. Rediscovered historical footage shows Addams, Hamilton, and Jacobs before the Brandenburg Gate in Berlin on May 24, 1915, during a visit to German to meet government leaders. She also visited German-occupied Belgium.

Hamilton returned to Europe with Addams in May 1919 to attend the second International Congress of Women at Zurich, Switzerland. In addition, Hamilton, Addams, Jacobs, and American Quaker Carolena M. Wood became involved in a humanitarian mission to Germany to distribute food aid and investigate reports of famine.

In January 1919 Hamilton accepted a position as assistant professor in a newly-formed Department of Industrial Medicine (and after 1925 the School of Public Health) at Harvard Medical School, making her the first woman appointed to the Harvard University faculty in any field. Her appointment was hailed by the New York Tribune with the headline: “A Woman on Harvard Faculty—The Last Citadel Has Fallen—The Sex Has Come Into Its Own”. Her own comment was “Yes, I am the first woman on the Harvard faculty—but not the first one who should have been appointed!”

During her years at Harvard, from 1919 to her retirement in 1935, Hamilton never received a faculty promotion and held only a series of three-year appointments. At her request, the half-time appointments for which she taught one semester per year allowed her to continue her research and spend several months of each year at Hull House. Hamilton also faced discrimination as a woman. She was excluded from social activities, could not enter the Harvard Union, attend the Faculty Club, or receive a quota of football tickets. In addition, Hamilton was not allowed to march in the university’s commencement ceremonies as the male faculty members did.

Hamilton became a successful fundraiser for Harvard as she continued to write and conduct research on the dangerous trades. In addition to publishing “landmark reports for the U.S. Department of Labor” on research related to workers in Arizona copper mines and stonecutters at Indiana’s limestone quarries,Hamilton also wrote Industrial Poisons in the United States (1925), the first American textbook on the subject, and another related textbook, Industrial Toxicology (1934). At tetraethyl lead conference in in 1925, Hamilton was a prominent critic of adding to gasoline.

Hamilton also remained an activist in social reform efforts. Her specific interests in civil liberties, peace, birth control, and protective labor legislation for women caused some of her critics to consider her a “radical” and a “subversive.”[49] From 1924 to 1930, she served as the only woman member of the League of Nations Health Committee. She also visited the Soviet Union in 1924 and Nazi Germany in April 1933. Hamilton wrote “The Youth Who Are Hitler’s Strength,” which was published in The New York Times. The article described Nazi exploitation of youth in the years between the two world wars. She also criticized the Nazi education, especially its domestic training for girls…. 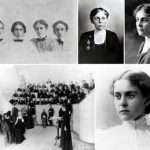