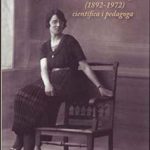 Doctor in Biology, she was one among the first women professors in Spain and an example of the links of solidarity established among women of WILPF. While researching in London, 1920-21, she attended Bedford College for Women where she met Janet Perry, Professor at King’s College. She also met Quaker feminist Edith M. Pye, who later became president of WILPF (1933-34).

During the Spanish Civil War, E. Pye went to Barcelona as supervisor of humanitarian help and met M. Comas in the border. As a delegate of the Republican Government, M. Comas travelled to England to explain the situation in Spain and after the bombardment of Gernika she took charge of the 3.800 Basque children sent as refugee to that country.

When the dictatorship took power in Spain Margarida had to drop out her investigations on Genetics and exile herself in England, where E. Pye helped her. The rest of her life she worked as a teacher of Biology at Dartington Hall School (Devon), England, dying in 1972, in Exeter.