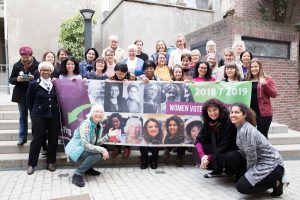 30 Women from European WILPF sections and groups in Norway, Finland, Sweden, Denmark, Holland, France, Spain, Germany, Italy, Belgium, UK, Austria, Bosnia, Ukraine get to know about “WomenvotePeace”  and respective activities and formulated a letter to promote a feminist and peaceful Europe which will be shared with the project team. 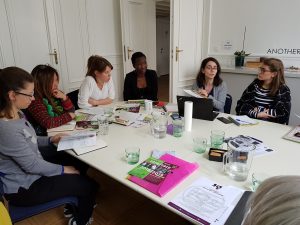 Very effective dialogue with the young team of EWL – a lot of synergies towards commitments for a feminist and peaceful Europe. Great attention and appreciation for “WomenvotePeace” 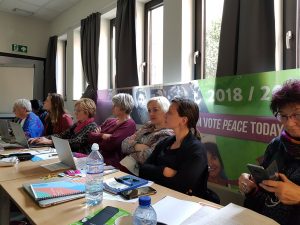 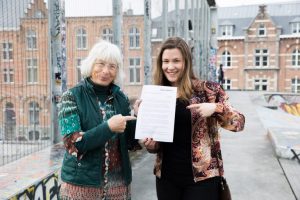 Open letter to European Parliamentarians and candidates, signed by Heidi Meinzolt and Lina Hjärtström, members of the International Board of WILPF for the European region

A Call for a Peaceful Feminist European Union, April 15, 2019

Members of the WILPF Sections in Europe met this weekend in Brussels. The main goal was to discuss crucial issues related to the upcoming European Parliament elections happening from 23 May to 26 May 2019. In particular, members exchanged their national experiences and explored possible solutions for a peaceful feminist Europe.

WILPF has for the past 100 years worked for sustainable peace. Since gaining suffrage, women, from all around the world, have always chosen peace over war. We currently perceive the EU on the opposite spectrum of its founding principles of human rights, peace, equality, and justice.
The EU is not only relying more and more on militarism, but it is also closing its borders, and excluding non-Europeans from the EU. WILPF Sections in Europe also expressed their concerns on nuclear armament, migration and asylum policies, and climate change. For these reasons, the European Sections are appealing to Members of the European Parliament (MEPs) and in particular to the candidates to the elections, to stop militarisation, to relocate its resources and military funds to social services like education, healthcare, and pensions, and to eliminate war from among its instruments of foreign policy. The EU’s focus should be on peace, on the wellbeing of its people, and on sustainable living for all.

Furthermore, the EU must effectively enforce the principles of equality before the law and non-discrimination as per the Charter of Fundamental Rights of the EU. Despite, in theory, these principles holding mandatory legal value, in practice, as Jennifer Menninger, from Young WILPF Germany highlighted, this is not seen, and not everyone has equal access to claim their rights.

Working towards a Feminist Europe

At the meeting, it was also discussed how gender equality has not been reached notwithstanding it being an EU founding target. Despite women accounting for over 50% of the world population, at the European Parliament in 2018, female MEPs only accounted for 36.1%. In European national parliaments, only 3 of 28 Member States have over 50% of female parliamentarians, and another three have equal numbers of female and male parliamentarians.  This is not good enough. WILPF European Sections demand the EU to work harder to achieve gender and workplace equality, by ensuring the full inclusion and participation of women in conflict resolution and peace talks but also in all our communities, states and international organisations.

Concretely, the Sections want MEPs to reaffirm their commitment to bring about democratic governance at both EU and national level, and make the EU an international body capable of guaranteeing EU law and international human rights standards. WILPF remains convinced that the achievement of peace, and the achievement of equality and justice for all people, together with the full inclusion and representation of women in all our diversity, are inseparable goals.

The members of the European Sections have put these concerns and demands on a letter addressed to the candidates in the European Parliamentary elections. The letter is a call to future MEPs to uphold the EU’s original values of solidarity, equality and justice.